The prepared text of today’s sermon at MacAlpine Presbyterian Church is below.  Israel’s question, “Are we all to perish?” is the same kind of thinking that is all-to-common today as American Christians often cannot see a future for the church.  But we have even greater reasons for hope than they did.  If you listen to it using this link, you’ll notice that the audio includes parts not in the prepared text.  Next Sunday we will be exploring Numbers 20.  I would recommend that you start with the post at this link for further reading on this section of Numbers. 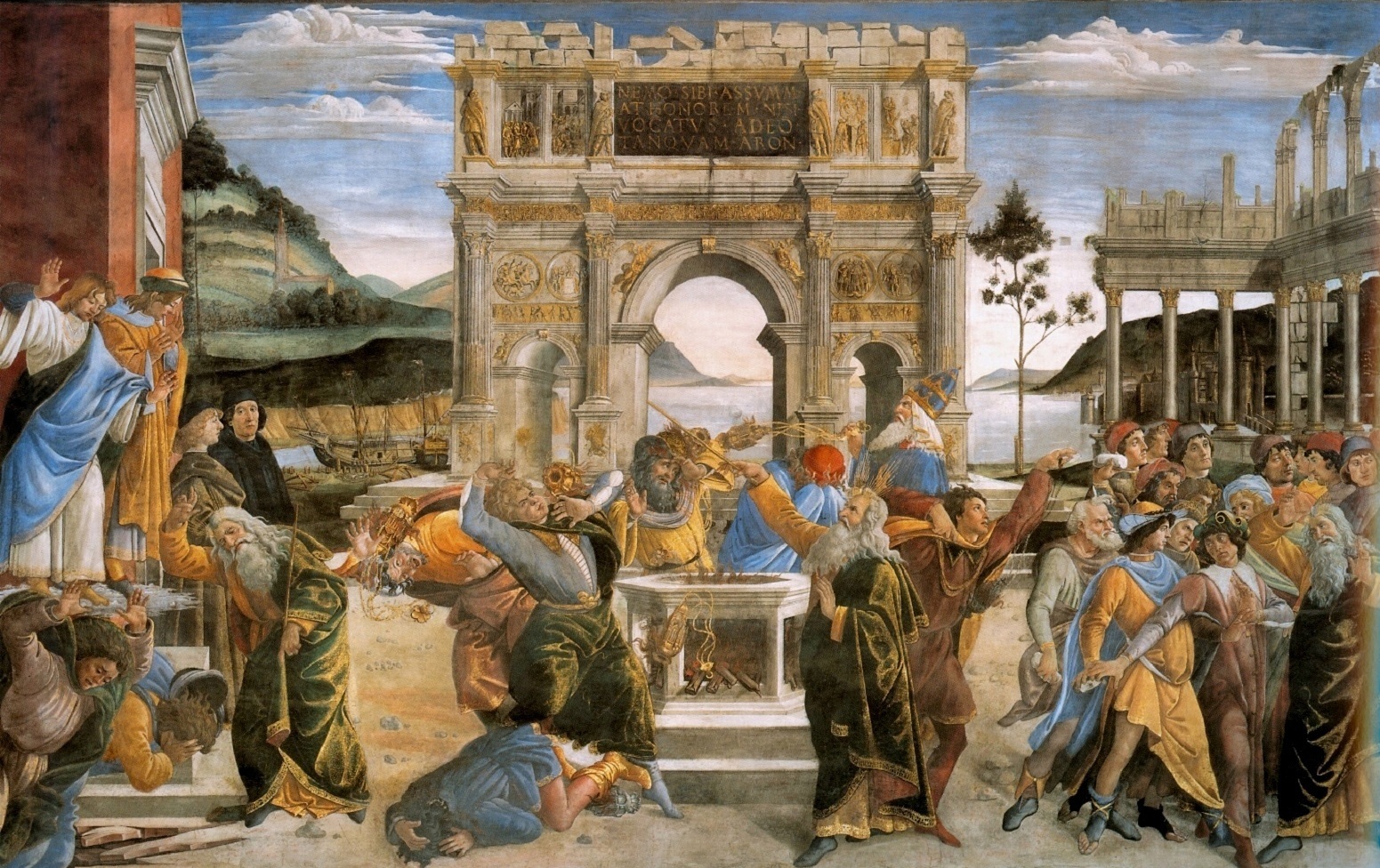 The Punishment of Korah and the Stoning of Moses and Aaron. Fresco by Sandro Botticelli in the Sistine Chapel, 1480–82.

A few Sundays ago I mentioned to you that there is a pattern in the Torah of Moses of major transgression and then collection of laws. Thus after the rebellion that would keep the people of Israel wandering in the wilderness for a total of forty years, there was a collection of laws. The collection of laws in Numbers 15 was a rebuke of that rebellious generation—a generation that would rather go back to Egypt or enter the land of Canaan without the Lord than to believe in Him. These laws described sacrifices that would be possible because the land is good even though that rebellious generation wanted to believe that the land wasn’t good. Because YHWH gave these laws to rebellious people, giving them laws increased the trespass. Those laws gave Israel knowledge of sin, arousing their sinful passions, and then bringing God’s wrath. His wrath came in the form of stoning to death a man who picked up sticks on the Sabbath day. His wrath came in the form of the earth swallowing alive Korah, Dathan, Abiram, and their families. His wrath came in the form of fire consuming the 250 men offering incense to Him. His wrath came in the form of a plague that killed an additional 14,700 people. Wrath went out from the Lord in the form of a plague in Numbers 16 because the people had committed yet another transgression. That transgression was a rebellion where the whole congregation of Israel grumbled against Moses and Aaron saying that they had killed Korah, Dathan, and Abiram, and their families, and the 250 well-known chiefs of the congregation in the affair of Korah. And the Lord gave them a prophetic sign of the end of grumbling, the staff of Aaron sprouted and put forth buds and blossoms and bore ripe almonds. However, the people of Israel focused on the staffs from their own tribe. Those staffs remained dead sticks that would be good kindling for a fire. So the people interpreted the sign as bad news as we will read in the last few verses of Numbers 17. And the collection of laws that follow it are God’s reply.