The Gospel Announced by Angels 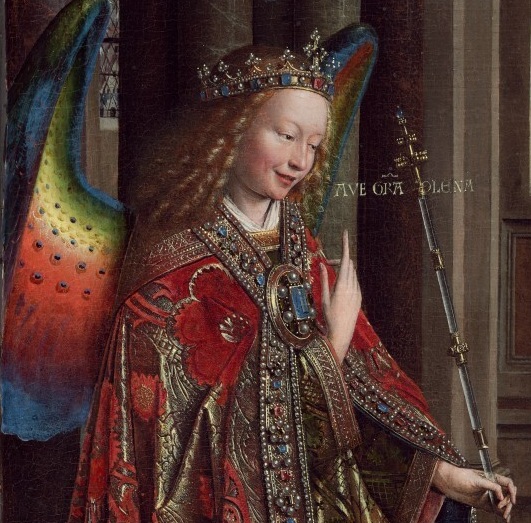 One of the things that strikes me in many of these passages is all of the angels. The first story in the Gospel of Luke is a story about the angel Gabriel appearing to Zechariah the priest. Then the second story shows the angel Gabriel going to the virgin Mary. The first story in the Gospel of Matthew includes an angel appearing to Joseph in a dream. Then when Mary gave birth to Jesus there were shepherds out in the field and an angel appeared to them and after speaking to them they saw with the angel a multitude of the heavenly host praising God. Another important part of these stories for both John the Baptist and Jesus is that these children were called the names given by the angel before they were conceived. Many of the Jewish people received the law as delivered by angels (Acts 7:53, Gal 3:19). And some received the gospel as announced by angels.

The gospel announced by angels is that Jesus would be great and be called Son of the Most High and would sit on the throne of David and reign over the house of Jacob forever and of His kingdom there will be no end. They announced that the Holy Spirit would come upon the virgin Mary and the power of the Most High would overshadow her and therefore the child to be born will be called holy—the Son of God. They testified that nothing will be impossible with God. They proclaimed that Jesus will save His people from their sins. They announced the birth of a Savior who is Christ the Lord. They declared that His birth was good news of great joy, not only for Israel, but for all the people. They heralded everlasting and increasing shalom. And when the Spirit came upon people and they prophesied in these passages, they proclaimed the same message first announced by the angels. It wasn’t delivering more law, it was announcing that God will do it—proclaiming God will take care of it—a Savior is born!

The Gospels were written at a time when there was great fascination about angels and speculation about those things that we cannot see with our physical eyes. But we live at a time when many believe that what we can see is all that there is. The other day I was reading something online where the parent was talking about how their child was having trouble with the angels in these stories. As I recall it, this child believed in the gospel but was having trouble believing that there were angels in the Christmas story. It is possible that this child doesn’t have much of an imagination so the child has trouble with those things that people ordinarily don’t get to see; its possible that this child like many Americans associates imagination with imaginary—that is, whenever they hear something that requires they imagine it they think they are hearing something made-up—they classify it with fiction rather than nonfiction; its possible that this child has some other reason I don’t know. But the presence of angels in these stories only seems “natural.” It should be far more difficult to believe in the Incarnation of the Son of God as a baby in the womb of Mary. It is hard to imagine such a thing happening without angels announcing it. And they did announce it. Some had trouble believing what they announced like Zechariah; some embraced it in faith like Mary and Joseph; and others went to see the sign that the angels announced so that they could know that they weren’t hallucinating. In any case, it is a bit of a surprise to whom the angels announced these things. Gabriel announced them to Zechariah who lived with the shame of being childless, then Gabriel announced them to Mary, a few months later an angel announced them to Joseph, and then an angel announced the birth of Jesus to shepherds in the field. The angels didn’t announce these things to the powerful in their palaces, or to the wealthy in their mansions, or to the multitudes in the cities but to a few people with whom God was pleased. And seeing as how the word angel means messenger, these few people were able to act as angels for others as they spread the message of great news for all kinds of people. If word spread to Jerusalem, I would imagine that it was quickly dismissed by many as the delusions of ignorant country-folk. But eight days later there were two in the temple at Jerusalem to whom God revealed that this was the Lord’s Christ and this was just the beginning. Thanks be to God. Amen.